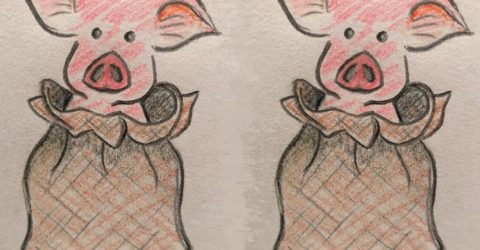 My daughter is a straight ‘A’ student. She’s studying to be a lawyer. She’s pretty damn intelligent. She doesn’t know what ‘To cut the mustard’ means.

It occurred to me that the English language is full of the dead bodies of words and phrases that are just not really incorporated much into modern teaching. They are there, occasionally hidden in Young Adult fiction whose authors have decided to slip in a long forgotten phrase from their own youth in the hope of resurrecting it in today’s young culture, but they just seem so boringly old fashioned.

With that in mind, I am re-inventing the wheel and updating these phrases so even babes in arms can understand them and then youth won’t be wasted on the young. Amen to that, but remember, Rome wasn’t built in a day. Take it with a grain of salt if you like, I may be barking up the wrong tree.

These are just a few; I’m currently compiling a book with many more.

A PIG IN A POKE

Basically accepting a deal without looking into it first; in other words, don’t buy a pig until you have looked at it first. A poke is a sack in which piglets were transported to market, but sneaky market traders would try to conceal runts in the bag in the hope that buyers would take the sack without checking the pig. British law has a Latin phrase for this: ‘Caveat Emptor’, which means ‘Let the buyer beware’.

Someone who criticises the person doing all the work. The Bismarck Tribune published the following in 1921: ‘A back seat driver is the pest who sits on the rear cushions of a motor car and tells the driver what to do. He issues a lot of instructions, gives a lot of advice, offers no end of criticism. And doesn’t do a bit of the work.’

BATS IN THE BELFRY

Meaning crazy and eccentric. Bats tend to fly erratically and traditionally inhabit church bell towers, also known as belfries. To say someone has bats in the belfry is to infer that someone is behaving as though they have erratic creatures flying around in their head. First popularised around 1900 in America, along with the word ‘batty’ to refer to odd behaviour.

BEFORE YOU CAN SAY JACK ROBINSON

A very short time; very quickly. The real Jack Robinson that the phrase refers to has never really been found, so it suggests that this Jack Robinson is a mythical figure along the lines of Jack Frost. Whoever he was, something would have to happen very quickly before you could utter his name.

A stark warning to never trust your enemies, even if they show up with a peace offering. The phrase refers to the wooden horse of Troy, which was used by the Greeks to hide inside to get into the city; it is referenced in Aeneid, Book 2, by Virgil in 19BC. It translates as this: ‘Do not trust the horse, Trojans. Whatever it is, I fear the Greeks even when they bring gifts.’

Meaning to succeed or be of high standard, it is unclear why mustard was chosen for this phrase, though it could be a paraphrase of the term ‘as keen as mustard’. This seems to be feasible; people who are eager and energetic could be likened to the sharpness of mustard flavour. It’s hard to pinpoint the origin but by the late 1800s, it was gaining in popularity.

To focus on trivial matters and neglect your responsibilities in times of crisis. The legend goes that Emperor Nero chose to play his violin while Rome burned around him during the great fire of 64AD. Historians tend to be conflicted with this version of events, but the phrase stuck.

Giddy tends to mean mad or stupid, but is also likened to feeling dizzy. The phrase, which is used as an exclamation of surprise, could possibly derive from a farce written by Brandon Thomas in 1892 called Charley’s Aunt. The aunt of the title is depicted as completely bonkers, although the phrase is not actually used in the play.