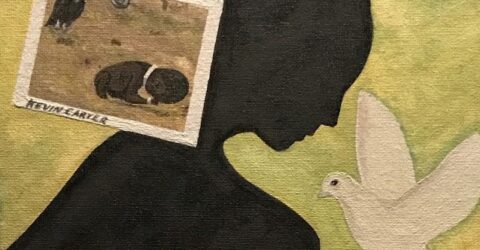 A photograph that haunts me often is Kevin Carter’s Starving Child and Vulture. In 1993, Carter was in Sudan covering the catastrophic effects of the famine which ravaged the area. Whilst there, he heard a whimpering child in the open bush, and he photographed the emaciated toddler from a distance as he had been told not to assist famine victims due to the threat of disease.

As he took photographs, a huge vulture landed nearby. Carter waited for a while, hoping the vulture would fly away, but it remained near the child, ready to claim a helpless meal. Carter eventually scared the bird away and watched as the child crawled towards a feeding centre; however, he never established whether the child made it to safety. 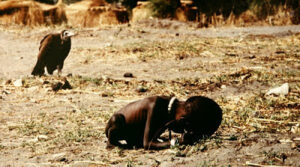 The image, published in The New York Times, won Carter a Pulitzer Prize, but caused a public outcry over whether he should have intervened. Subsequent investigations appeared to suggest that the child did survive that incident, but succumbed to disease at the age of 14. Kevin Carter never came to terms with everything he had witnessed. He wrote: “I am haunted by the vivid memories of killings and corpses and anger and pain.” He then took his own life.

This tragedy is difficult to process. The devastating scene of a starving child is terrible enough, but the lurking vulture is just too horrific. Then the subsequent suicide of the photographer who was too haunted to live with what he had seen.

This image still haunts me, and while the event can never be changed, I decided to change the tragedy by painting the child into a new scene, also changing the vulture to a more peaceful dove. It doesn’t alter anything, the tragedy still happened, but art can be a visual way to express a deep empathy, a wish that the child could be safe and protected.

Writerpreneur Magazine and Art in the Shadows have been created by author and journalist Tracey Newman to guide, encourage, inform and inspire.