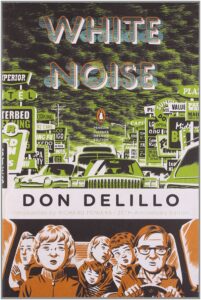 This book is probably one of the most studied postmodern novel out there. It is funny, sad, poignant, and has a lot to say about modern America, although much of it’s message is relevant in most Western societies. It is also even more applicable now than when it was written in 1984 (Ironic that this was also the year of the Orwellian prophesised Big Brother).

The book is full of irony without bitterness; the Gladney family are too entrenched in modern-day society to realise the trap they are so malevolently caught in. Even when Jack Gladney’s daughter murmurs the words of a car advert in her sleep, Jack can’t see the harm in the influence of the ever-present television set and mass marketing campaigns.

The Gladney family is the epitome of dysfunction; death and catastrophe are never far from their thoughts, but they are oblivious to the real destruction caused by the insidious pace of technology through modern society. Read this if you like reading social commentary, but also read it if you want to have a smirk at how ridiculous life can be when we lose our real sense of value.

The family is the cradle of the world’s misinformation. There must be something in family life that generates factual error.

When times are bad, people feel compelled to overeat. Blacksmith if full of obese adults and children, baggy-pantsed, short-legged, waddling.

For most people there are only two places in the world. Where they live and their TV set.

The supermarket shelves have been rearranged. It happened one day without warning. There is agitation and panic in the aisles.